LINTU E PINTU is a theatrical show in Sardinian language, the text is by Mario Medas (great actor and author of Sardinian theater), staged by the Associazione Figli d’Arte Medas under the direction of Gianluca Medas.

For this show (I signed the soundtrack) there was the need to create different atmospheres, melancholic, gloomy, sweet, containing and scanning the theatrical performance. There is also the use of launeddas, modified to be able to play in a minor key (traditional launeddas play in a major key). Most of the original music of the show refer to melodic / rhythmic cells of traditional Sardinian music.

In addition to the sounds recorded with some acoustic instruments, such as launeddas and classic guitar, there are many synthetic sounds deriving from synthesizers and sound production modules (ROLAND D50, E-MU SYSTEM Proteus / 1) and the use of an effects processor YAMAHA SPX 50D to make the main character’s voice of consciousness (played by Mario Medas).

The music preparation work was carried out in close contact with Gianluca (the director) and Mario Medas, reading and rereading the script to understand its structure and where original music was needed. During the rehearsals I used to bring the musical samples to verify the goodness of the music, to understand its length and the expressive intensity needed. After the approval I moved on to the final realization of the tracks. A part of this musical work consisted in the realization of the voice of conscience of Ziu Basili (Mario Medas), which took the name of “Su stromingiu”, recorded by Mario Medas himself. In the show, the voice of conscience (recorded) dialogues with Ziu Basili (who performs live). This fact, having to dialogue with a recorded voice, often makes it difficult to realize the timings and inflections of the voices in the blow and response of the dialogues. During the recording sessions I was amazed how Mario resolved the issue in an exceptional way. In fact, it was as if he were giving the voice to a cartoon character of a large production, with spectacular voice inflections, imagining the answers or how he would dialogue live with the character Su stromingiu. 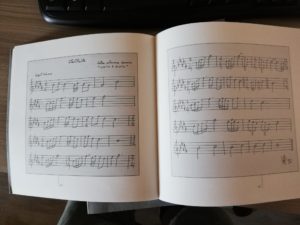 The musical piece CECILIA opens with a small introduction, of only two bars, which is followed by a simple melancholic melodic theme that is repeated three times, whose closings diversify, and then closes on the third repetition. Resuming for three more repetitions, but with the varied theme, the theme also ends this time on the third repetition. The same theme is changed twice only, which therefore omits the third repetition, in its place a small variation of the Bb pedal (with Bb Do three times) which closes the piece. The launeddas used are a Punt”e Organu in Bb with the third (Re brought to Reb) lowered by a semitone in the Mancosedda. La Mancosa plays a F pedal and the Tumbu the B pedal.
M.P. 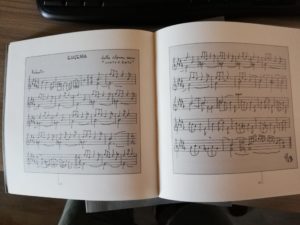 Even the piece of music EUGENIA opens with a small introduction (of only three bars), which is followed by a slightly rhythmic terced theme in 6/8, which closes with a response in contrast to Dela Mancosa. The launeddas used are a Punt”e Organu in Bb with the third (Re brought to Reb) lowered by a semitone in the Mancosedda, in the Mancosa there is the lowering of the VII degree (La brought to Lab) and the Tumbu produces a pedal of Sib.
M.P.